Repressed, Removed, Re-Educated:
The stranglehold on religious life in China

Introduction: freedom of religion or belief in China today

We will fully implement the Party’s basic policy on religious affairs, uphold the principle that religions in China must be Chinese in orientation and provide active guidance to religions so that they can adapt themselves to socialist society.

This country is launching a war against the soul…In Xinjiang, in Tibet, in Shanghai, in Beijing, in Chengdu, the rulers of this country are launching this war, but they have established for themselves an enemy that can never be detained, can never be destroyed, will never capitulate nor be conquered: the soul of man…

It seems that the Chinese government is at war with faith. It’s a war they will not win. The Chinese Communist Party must hear the cry of its people for religious freedom.

US Ambassador at Large for International Religious Freedom, Sam Brownback3

The level of freedom of religion or belief in China is rapidly and significantly decreasing. There are tangible signs of this, such as the demolition of temples, mosques and churches by authorities, and the removal of religious symbols and pictures from homes and places of worship. There are also less visible changes, however: clergy removed from their positions and replaced with those with government approval; pressure on schools to check up on the religious beliefs of their students and staff; and surveillance cameras installed in and around places of worship. In the most extreme cases, religious adherents are arrested, imprisoned, tortured and even killed in connection with their religion or belief.

This downward trend fits into a broader pattern of increasing human rights abuses under Xi Jinping, accompanied by and manifested through a shrinking space for civil society, a heightened sensitivity to perceived challenges to Party rule, and the introduction of legislation that curtails civil and political rights in the name of national security.

The reality of the right to FoRB for religion and belief communities in China remains a mixed picture, and conditions vary according to religion, location, ethnicity, and attitude of local officials, as well as other factors. It is therefore impossible to describe ‘what it’s like to be a Christian’, or Muslim, Buddhist and so on, in China today. However, under Xi Jinping, there has been a new focus on religion at the highest levels of government4, a revision of the Regulations on Religious Affairs, and fresh emphasis put on the requirement that all religious communities in China ‘sinicise’ by becoming ‘Chinese in orientation’ and adapting to ‘socialist society’. CSW’s sources believe the intent behind ‘sinicisation’ is to eradicate independent religion and bring all religious activities under state control. From thousand-strong urban churches, to village temples hundreds of years old, more and more religious communities are feeling the effects of these developments on everyday religious life in China.

The government has more and more power over education, the media, and now religion. The government wants control over everything, over religion and education and culture. If anyone takes part in activities [outside of the government approved activities] they will be held responsible.

Download the full Version of the CSI Report here:

In its new report about China, the well-known Christian NGO denounces the increased repression of Muslim, Buddhists, Taoist, Catholics, House Churches, Falun Gong, and The Church of Almighty God. 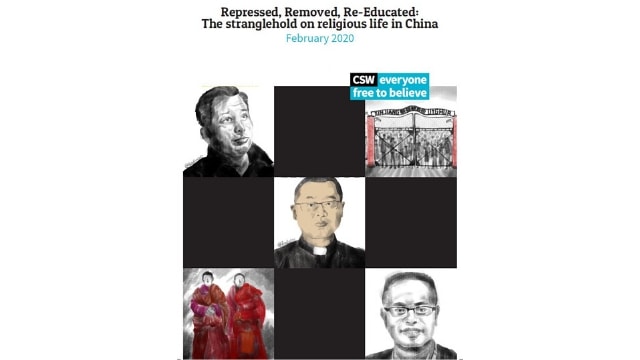 On March 31, 2020, Christian Solidarity Worldwide, a London-based Christian organization and one of the most respected NGOs denouncing religion persecution internationally, published its 2020 report on China.The report, titled Repressed, Removed, Re-Educated: The Stranglehold on Religious Life in China and illustrated by sobering but beautiful cartoons by Chinese artist and human rights activist Badiucao, argues that “the level of freedom of religion or belief in China is rapidly and significantly decreasing,” particularly since the revised Regulation on Religious Affairs came into force in February 2018.

As examples of a widespread religious repression, the report mentions:

“•The demolition of unregistered church buildings such as the 50,000-member Golden Lampstand (Jindengtai) Church in Shanxi Province.

The report includes a case study about the Living Stone Church (Huoshi Church), a Protestant house church in Guizhou, which has been assaulted by the CCP authorities, with its main pastors arrested and sentenced to years in jail. It also mentions that Catholics who refuse to join the government-controlled Patriotic Catholic Church are still harassed and persecuted, and that after the Vatican-China deal of 2018 the situation seems to get worse rather than better.

The document summarizes credible evidence that three million Uyghurs and other Turkic Muslim believers are detained in the transformation through education camps in Xinjiang, which are not “schools,” as the CCP propaganda maintains, but jails where torture is liberally practiced. Similar detention facilities detain Buddhist monks and activists in Tibet, who also report instances of torture, while monasteries share the fate of mosques in Xinjiang and are destroyed.

OPEN LETTER TO GUTERRES: SAY NO TO BEIJING 2022 GAMES!

The report mentions that “‘Bitter Winter,’ an online magazine on religious liberty and human rights in China published by CESNUR, the Center for Studies on New Religions, has also reported a crackdown on Taoism and traditional folk religions, including the closure of temples and the destruction of religious statues and materials,” and goes on to explain  that the single most persecuted groups are those labeled as xie jiao, in particular Falun Gong and The Church of Almighty God, against whose members Article 300 of the Chinese Criminal Code is consistently enforced.

The text reminds its readers that organ harvesting from prisoners of conscience from Falun Gong, and other religious minorities, has been documented by the independent China Tribunal, and offers details on the persecution of The Church of Almighty God.

“The Church of Almighty God (CAG), it reports, was labelled a xie jiao in 1995 by the Central Committee and the State Council. According to CAG’s 2018 annual report, in 2018 alone, 11,111 church members were arrested for engaging in church activities, and as many as 20 individuals died as a result of persecution. The report cites government documents from various provinces which outline campaigns against CAG. The report also details ongoing violations against CAG members, including torture in detention, intrusive surveillance, and intense pressure to recant. Church members who have returned to China from abroad have disappeared.”

“The US Department of State’s 2018 Report on International Religious Freedom, the document continues, cites several reports of violations against CAG members, including the death in custody of a member in Guizhou in March 2018; the authorities told the family she had committed suicide. When the family questioned this determination, authorities threatened them with loss of employment and university access for their children. In another case reported by the Church and cited by the State Department report, one member was arrested and tortured for 25 days before being sent to hospital with severe head injuries to the skull. She died several months later.”

The text also mentions that defenders of religious liberty, including lawyers and journalists, are arrested or “disappear.” At least before the coronavirus crisis, some of the persecuted managed to escape from China and seek asylum abroad. But, just as it spread the virus responsible for COVID-19, the CCP is also spreading the virus of religious persecution, trying to have the asylum applications rejected and the refugees deported back to China.

The comment the report proposes for the Xinjiang Uyghur Autonomous Region (XUAR) can be in fact applied to all of China.

“Given the high risk of arbitrary detention and ill treatment for those returning to XUAR from overseas, individual national governments should also ensure that individuals from XUAR belonging to ethnic and/or religion or belief minorities are not forcibly deported to China.”