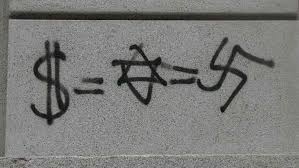 Washington DC/London, 19.12.2016 (World Affairs) – “Anyone guilty of anti-Semitism will be called out on it.” With those words, delivered Monday in a speech to the Conservative Friends of Israel annual lunch, the United Kingdom’s Prime Minister Theresa May declared a just war of sorts. A timely one too. For as David Nirenberg, the University of Chicago professor and author of Anti-Judaism: The History of a Way of Thinking, has warned us, “We live in an age in which millions of people are exposed daily to some variant of the argument that the challenges of the world they live in are best explained in terms of “Israel””.

Nirenberg’s book is a magisterial survey and its conclusion should leave us shaken: hostility to the Jews has been a constituent element of western culture. The uncanny flexibility of antisemitism, its remarkable ability to shape-shift, has ensured both its impressive longevity and our woeful tendency to fall each time for its new guise.

Anti-Semitism’s core motif is that the Jews, collectively and in their essence, are malign. Chameleon-like, the attribution of malignity changes with the times and with the needs of the anti-Semites. Jews have been “God-killers”, “aliens”, “cosmopolitans”, “Jewish bankers”, “Jewish-Bolsheviks”, “untermenschen”. These have all served as code words to mark the Jew for destruction.

And now the code word is “Zionist” or “Zios” or “Zio-Nazis”. That which the demonological Jew once was, demonological Israel now is: uniquely malevolent, full of blood lust, all-controlling, the hidden hand, tricksy, always acting in bad faith, the obstacle to a better, purer, more spiritual world, uniquely deserving of punishment, and so on.

May announced that the British government is formally adopting the working definition of anti-Semitism proposed by the International Holocaust Remembrance Alliance (IHRA)—an intergovernmental body set up at the turn of the century by 31 member countries, 24 of which are EU member countries. We now have a definition that catches up with modern anti-Semitism. “Antisemitism is a certain perception of Jews,” the definition runs, “which may be expressed as hatred toward Jews. Rhetorical and physical manifestations of anti-Semitism are directed toward Jewish or non-Jewish individuals and/or their property, toward Jewish community institutions and religious facilities.”